Hybrid Pedagogy will go dark from December 10, 2014, through early January 2015. Many of our readers and authors take this time to prepare for the new semester and/or spend time with family. The conversation takes a deep breath during the month, ready to make more noise in the new year.

In the meantime, we reviewed the events and publications of 2014 and present our list of the year’s greatest hits — those articles and projects that we believe warrant another look or a closer read during the break. For new readers, these articles present the core of what we do here at Hybrid Pedagogy. They represent the most successful conversation-starters and community-builders of the year. Take a(nother) look and (re)discover what we’ve cooked up this past year.

An Open Letter to My Students by Kris Shaffer
Finding My Voice as a Minority Teacher by Chris Friend
An Affinity for Asynchronous Learning by Maha Bali and Bard Meier
From Ph.D. to Poverty by Tiffany Kraft
Best Practices: Thoughts on a Flash Mob Mentality by Janine Debaise
Spect-ops at Harvard: How a World-leading University Reacts to Techno-centrism by Carlo Perrotta

The Maker Movement and the Rebirth of Constructionism by Jonan Donaldson
Introducing Digital Humanities Work to Undergraduates: An Overview by Adeline Koh
Contingent Mother: The Role Gender Plays in the Lives of Adjunct Faculty by Margaret Betz
The Discussion Forum is Dead; Long Live the Discussion Forum by Sean Michael Morris and Jesse Stommel
10 Things I’ve Learned (So Far) from Making a Meta-MOOC by Cathy N. Davidson

4 pieces from 2014 that we found elsewhere and republished

Technology 101: What Do We Need To Know About The Future We’re Creating? by Howard Rheingold
On Silence by Audrey Watters
On, On, On by Kate Bowles
Double Flip: 3 Insights Flipping the Humanities Seminar by Kathi Inman Berens

Love in the Time of Peer Review by the Hybrid Pedagogy Editorial Board
Hybrid Pedagogy, Digital Humanities, and the Future of Academic Publishing by Sean Michael Morris and Jesse Stommel
A Scholarship of Generosity: a Hybrid Pedagogy Mixtape

1 meme to rule them all 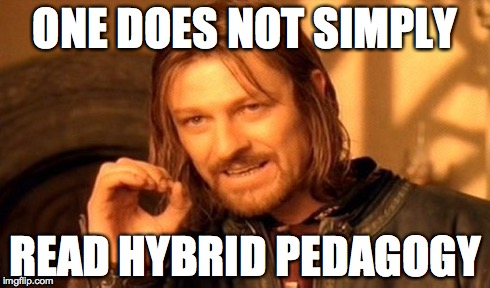 Sean Michael Morris
Sean Michael Morris is the Director of Digital Pedagogy Lab and Senior Instructor in Learning, Design, and Technology at the University of Colorado Denver.
Twitter RSS
http://www.seanmichaelmorris.com
Read more articles by Sean Michael Morris.
The Rules of Twitter
Twitter is an incredibly dynamic digital tool that can create spaces of flattened hierarchies. These spaces can fuel inclusive pedagogy. But before teaching with Twitter, instructors have to think about how to use it together with students. What are the rules — particularly in relation to ethics? Twitter as a

Open Digital Pedagogy = Critical Pedagogy
There seems too often to be an explicit agreement that instructors lead and students respond, that instructors advise as students seek guidance, that when instructors talk about their pedagogy, it should be outside of earshot of the students they instruct. Open digital platforms can break these implicit rules to make