Educational theory and practice have begun to appear more frequently in the popular press. Terms such as collaborative learning, project-based learning, metacognition, inquiry-based learning, and so on, might be new to some audiences, but they have a relatively long and well-documented history for many educators. The most widely-known and promising pedagogical approach is constructivism grounded on the work of Piaget, Vygotsky, and Bruner. Given how it has transformed my own understanding of pedagogy, teaching, and learning, constructionism seems ripe for a similar resurgence — like a phoenix rising from the ashes of Taylorization and standardized testing. Constructionism brings creativity, tinkering, exploring, building, and presentation to the forefront of the learning process.

Over the last decade my teaching has undergone a dramatic transformation as I played with many methods for getting my students to learn not only through doing, but also through creating. Initially this interest was sparked by a belief that targeting the highest level of Bloom’s Taxonomy (revised) would lead to mastery in all the other cognitive domains. Later it was bolstered by an interest in creating more collaborative learning opportunities for my students.

I also felt passionately that anything my students create should have an authentic audience. I realized, after reading the works of influential writing theorist Peter Elbow, that when they wrote essays for me, they were writing to be judged, not writing to inform. Elbow argued that:

When students write for teachers, they are writing ‘uphill’ in the authority dimension: instead of having the normal language-using experience of trying to communicate ‘across’ to others in order to tell them what’s on their mind, they are having the experience of trying to communicate ‘up’ to someone whose only reason for reading is to judge the acceptability of what they wrote and how they wrote it.

My first experiment was in having them write essays for their classmates, and although it was a vast improvement, still the audience seemed less than authentic.

Fortunately, my efforts to transform the way I teach came at the same time we were experiencing the societal shift from information consumerism to a production and remix culture. Now my students could write for a truly authentic audience through blogs, wikis, and websites. As I strove to facilitate learning through creating, I realized that text-based creations were only the surface and started to build learning experiences in which my students explored and leveraged the wealth of creativity tools which were freely available online, including podcasting, screencasting, online presentation, mindmapping, animation, and infographic tools. Rather than having them write essays, I encouraged them to explore various forms of digital media. They created things such as Prezi presentations, Screencast-O-Matic screencasts, Mindomo mindmaps, Go!Animate animations, and AudioBoo podcasts. I was worried at first that using these technologies would frustrate or confuse them, but was amazed at the immediate and powerful effect this had on my students’ learning process. Their comments reflected deep engagement, often saying that they would use the tools and the learning at hand in other areas of their life. Furthermore, comments such as “I feel like I can do so much more than I ever thought I could” demonstrated greater empowerment.

As the variety of types of creative artifacts my students were producing increased, I realized that I needed a stronger pedagogical framework to keep the work clearly aligned with the learning objectives. Impressive as they were, I couldn’t justify the creation of all these artifacts unless these creations were the best possible means of achieving the learning objectives. I didn’t want to fall into the common trap of using technology for the sake of using technology. After much trial and error, the solution for my particular situation emerged: published digital portfolios. These were in the form of individual student websites to which students would add their digital creations each week. The need to help the reader understand the artifacts produced a benefit which I had overlooked at first, namely, the need for metacognitive processes. When the students explained to the reader what they had created and why, their own learning was consolidated and deepened. An additional benefit was the opportunity for both individualization and collaboration. Each week students would individually create, introduce, and publish artifacts on their personal digital portfolio websites. Then they would share their work with their classmates through an online discussion board and were required to give in-depth feedback to their classmates.

As I searched for the theoretical vocabulary by which to explain what I was doing, I gravitated towards the works of John Dewey, Jean Piaget, and Lev Vygotsky. However, it wasn’t until I encountered the ideas of Seymour Papert, one of the founders of MIT Media Lab and the first proponent of constructionist pedagogy, that I realized there was a clear theoretical and research basis for my pedagogical practices. At its heart constructionism argues for what I had been trying to articulate: learning happens best when learners construct their understanding through a process of constructing things to share with others. Kafai, Peppler, & Chapman explain in their book The Computer Clubhouse: Constructionism and Creativity in Youth Communities:

Constructionism is based on two types of construction. First, it asserts that learning is an active process, in which people actively construct knowledge from their experience in the world. People don’t get ideas; they make them. This aspect of construction comes from the constructivist theory of knowledge development by Jean Piaget. To Piaget’s concept, Papert added another type of construction, arguing that people construct new knowledge with particular effectiveness when they are engaged in constructing personally meaningful products.

Imagine my surprise and joy when I realized that I had arrived at constructionism prior to knowing that such a theory even existed. I believe that thousands of other educators are unknowingly working within the constructionist paradigm as well. Although many within the Maker movement are aware that it has its roots in constructionism, the movement is gaining impressive momentum without the majority of Makers realizing that there is a strong theoretical foundation behind their work. After I came to understand this connection between my practices and the supporting theoretical framework I was better able to focus and refine my practice. Even more importantly, I felt more confident and powerful in forging ahead with further experiments in the learning situations I design for my learners.

Constructionism, a theory developed by Seymour Papert, one of the founders of MIT Media Lab, articulates a theoretical foundation for learning based on creativity, tinkering, exploring, building, and presentation. Papert had previously worked with Jean Piaget, but felt that Piaget’s constructivism placed too much emphasis on the internal mental processes of learners. He insisted that learning occurs not only through learners constructing meaning, but also through constructing real-world inventions which can be shared with others. He argues that:

the construction that takes place ‘in the head’ often happens especially felicitously when it is supported by construction of a more public sort ‘in the world’—a sand castle or a cake, a Lego house or a corporation, a computer program, a poem, or a theory of the universe. Part of what I mean by ‘in the world’ is that the product can be shown, discussed, examined, probed, and admired. It is out there.

The close relation of this idea to constructivism can be seen in the name which Papert gave his theory. Perhaps the similarity of the name constructionism to constructivism is one reason the theory never gained widespread recognition. Constructionism was born in the early days of personal computers and thus work on the theory was centered around computers, programming languages, and connections between computers and real-world artifacts. This was before the digital age in which internet technologies allowed anyone to become a producer of information rather than a consumer of information.

The culmination of my quest for more powerful learning grounded in theory and research came when recently I conducted an experiment in pushing constructionism into the digital age. In one of the classes I taught at Western Oregon University the students usually read four books on a topic of some contention in the realm of technology in education, engage in deep discussion, and write critical analyses of the ideas presented in the books. This term, however, I flipped the model entirely and had my students author and publish a book. In ten weeks the students had researched, written, edited, and published Massively Open: How Massive Open Online Courses Changed the World, the first book ever written on the subject of massive open online courses (MOOCs).

As I analyzed and started conducting formal research on what had occurred through this process (manuscript in preparation), I found that I had been supplementing constructionism with my own innovations. I had added a strong element of continual systematized reflection (metacognition) and more emphasis on an authentic public audience. My work in this project was influenced by other pedagogies besides constructivism and constructionism, such as Elbow’s Embracing Contraries: Explorations in Learning and Teaching, and Magolda and King’s ideas surrounding self-authorship.

The time is right for a rebirth of constructionism. In the early work on constructionism, the focus was on childhood education. The original experiments involved programming computers and interfacing student-made real-world objects with computers. This lives on today in the Maker movement. However, constructionism is still at the fringes of educational discourse. In order for the rebirth of constructionism to be brought into the mainstream, we need to broaden our definitions and research. They need to encompass learning at all ages in both formal and informal learning situations. Most importantly, our research and practice must encompass a wide variety of the digital tools which form the landscape of our students’ future learning and work environments.

A major challenge ahead will be the move toward research into a broadened theory of learning which goes beyond the original confines of constructionism. In order to not muddy the waters of the original theory by adding other elements, I have chosen to call the work I have been doing authorship learning. The core elements of authorship learning include multiple senses of authorship, including students authoring their creations, students authoring their own meanings and understandings, students engaging in self-authorship, and broader public authorship through publishing under Open Culture licenses which allow public remix authoring. Other key aspects of authorship learning include student ownership of learning, authentic audiences, and metacognitive practices. These aspects emerge from research and the experience of educators: students learn best when they construct their own meaning. This is facilitated most powerfully through a process of having them construct meaningful physical or digital things in the real world which are intended for a real audience, and these artifacts are constructed in collaboration with others through negotiated roles and through a process which involves systematic metacognition. 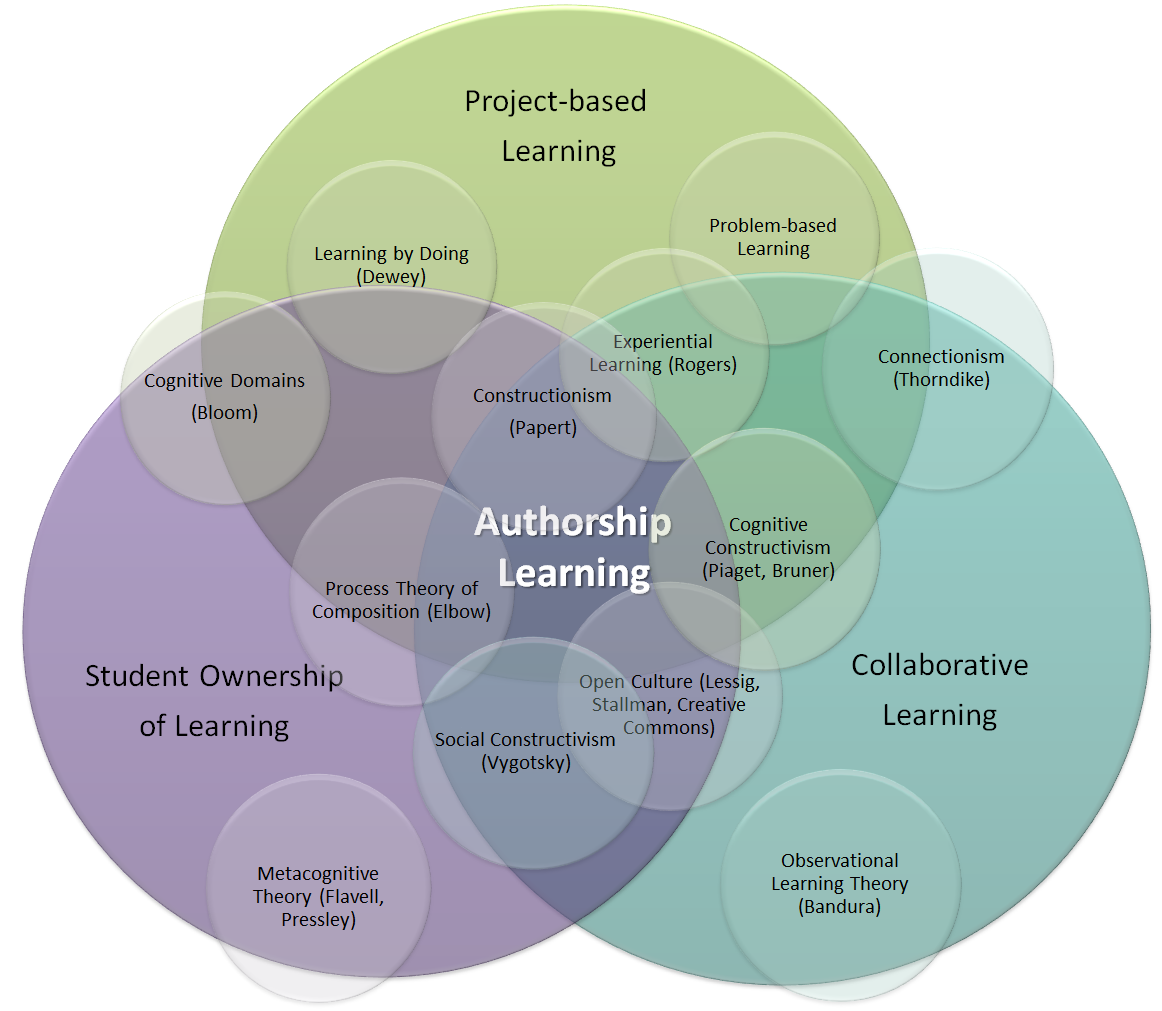 New digital tools available to students have flung open the doors to creativity, imagination, and student-directed learning. The sheer number of possibilities is daunting for any educator. Educational theory can help guide our choices and guidance of student learning. Constructionism has inspired me like no other idea in education has ever inspired me.

A deeply common and deeply problematic area of instructional design is the unquestioned adoption and propagation of online course quality rubrics.

The following vignettes are based on events that occurred during the 2020-2021 academic year, a pandemic year that called me and so many others to “pivot” to teaching and learning completely online.

For many of us, the Covid crisis brought into focus that assumptions underpinning our instructional design, and our ID practices themselves, were failing our teachers, students, and institutions.