It is not too hard to recognize that educational institutions, to a large degree, determine the process of engagement with learning and engagement with the learners. It should come as no surprise that unrepresented students might be tentative about actively participating in this process when their previous experiences with other schools or other social institutions might not have been positive. What underrepresented students are often asked to do, whether it is recognized or not, is leave their true identities — their true voices — at the door. “Anytime teachers develop a pedagogy, they are concurrently constructing a political vision. The two acts are inseparable” (Kincheloe, 2008, p. 9). As institutions and teachers, the way we set up our classrooms either makes space for students or ignores their identities.

Jesse Stommel says teachers need to be cognizant of the physical space(s) and the virtual spaces(s) the teacher and the students will occupy and also create pathways between what happens in the various physical spaces and what happens on the web, either with each other or by ourselves. To that I would add that teachers need to create pathways among students’ “voices” (students’ cultures, backgrounds. and experiences) to enhance the learning environment even further. Hybrid learning should not only involve combining the physical classroom with the web and other environments outside the classroom, but also combine western viewpoints, experiences, and ways of learning with those students who are often asked to leave these attributes at the door.

After spending several days with Indigenous scholars from the United States, Canada, New Zealand, and Australia, Alaska Native students who were part of a three year Alaska Native Teacher Preparation Program (ANTPP) gathered with the faculty from University of Alaska Fairbanks (UAF) School of Education and the University provost in 2011 to share their experiences. One Alaska Native student stated, “This world of higher education: it’s a whole new animal for us, and it is not a friendly one.”  A doctoral student shared, “I have to give up being Native in school, and at the end of the day it is exhausting.” The Provost approached the ANTPP Project staff after the presentation to ask if she could meet with Project participants to discuss some of the issues raised at the international gathering. Project participants, staff, partners, and evaluators engaged in a candid conversation with the Provost the following day where she committed to tracking down data on Alaska Native retention and completion of teacher education programs at UAF in order to determine the extent of the issues facing Alaska Native students in the School of Education. The comments from the Alaska Native students prompted me and others to ask, “Are our underrepresented students dropping out of our colleges and universities, or are they being driven away?” and “How do critical digital pedagogues use the ‘environment’ to amplify Indigenous voices and the voices of other underrepresented students to achieve a more inclusive learning classroom?” As teachers, the way we set up our classrooms either makes space for students or continues to ask them to leave their identities at the door. This is a political act; one we will make whether we realize it or not.

Believing that the higher education system has for centuries marginalized Indigenous cultures and peoples, Ilarion Merculieff, an Aleut elder from the Bering Sea’s Pribilof Islands, and Libby Roderick, a white professor from the University of Alaska Anchorage, jointly directed the Alaska Native Ways of Teaching and Learning project with faculty from the University of Alaska Anchorage. Alaska Native people from across the state spent a week with non-Native faculty to introduce the difficult dialogues of science and racism and help non-Native faculty learn in a setting profoundly different from their western experiences. In the introduction of their book Stop Talking that resulted from the project, Merculieff and Roderick wrote, “Before we could meet in a place of mutual respect and understanding, the privileged voice of academia [had] to yield some ground to Indigenous voices that have long been silenced or ignored.” There are numerous Indigenous voices waiting to be heard.

Indigenous peoples are typically thought of as the first people to occupy a land, and they have a strong connection to a land base and the environment. Indigenous people have their own forms of language, their own laws, and their own cultures. A shared aspect among Indigenous peoples is a shared experience of this connection to the land and the experience of colonization. Historic and contemporary forms of colonization bring Indigenous peoples together whether in Canada, Norway, New Zealand, Australia, Hawaii, Alaska, or other parts of the United States. Q’um Q’um Xiiem (Dr. Jo-ann Archibald), a member of the Stó:lō First Nations in Canada, is Associate Dean for Indigenous Education and Professor of Educational Studies at the University of British Columbia. Her book Indigenous Storywork: Educating the Heart, Mind, Body, and Spirit uses the metaphor of Indigenous basket weaving to introduce readers to Indigenous ways of understanding knowledge. Q’um Q’um Xiiem suggests such questions as “Who is indigenous?” and “What is indigenous knowledge?” are important questions to answer to create a place of mutual respect and understanding. To understand Indigenous knowledge requires looking at the nature of knowledge, the sources of this knowledge, the ways Indigenous people come to know this knowledge, and the ways the knowledge is passed on to others. Indigenous knowledge can be a guide to help us learn and teach and understand that our interactions with others are a continual process of learning through shared experience.  Q’um Q’um Xiiem describes how student retention following her Indigenous tradition would center on seeing new students as extended members of the University family. Seeing students in this manner could better guide us in determining how best to help students succeed. Q’um Q’um Xiiem suggests, “Let it be okay to have an indigenous heart and mind”.

At the 2014 Alaska Native Studies Conference in Juneau, Two Tlingit elders, Kaayastaan Maria Olsen and Kingeistí David Katzeek shared their views of education and describe how they actively work to ensure Indigenous voices are heard in the classroom and ensure Indigenous languages are not lost, especially in the academic setting. Kaayastaan Marie Olson says, “My language is my intellectual property and no one can take my intellectual property.” As Kaayastaan Marie Olson’s pupil, University of Alaska professor Lance Twitchell often says, “We are not looking to save our languages; we are looking to our languages to save us.” Kaayastaan Marie Olson was born in Juneau and in her earlier years spoke only Tlingit. She is a member of the Wooshkeetaan (People of the Houses Facing Each Other) Eagle clan of Áak’w Kwáan and her Tlingit name, Kaayistaan, was the name of her maternal grandmother. She graduated from the University of Alaska Southeast and currently works to preserve the Tlingit language, culture, and history.

Shangukeidi Clan Leader, Kingeistí David Katzeek, began his talk at the conference by putting a can of the soda Dr. Pepper on the podium and stating that his only Ph.D. is Dr. Pepper, a fact he is proud to claim, as he introduced the beverage to Southeast Alaska. Traditional Indigenous scholars, such as Kingeisti David Katzeek, are elders who are given the same recognition in their communities as Ph.D.s are given in the academic setting. By saying his only acknowledged Ph.D. in the western world is Dr. Pepper, he was interjecting humor into the beginning of his talk. Kingeistí David Katzeek told the story of “Eating from each other’s mouths” as an essential part of their learning process. He spoke on the traditional Tlingit Educational System, and how it used stories to teach about weaving baskets, making Chilkat Robes and canoes, as well as impart knowledge on salmon, biology, hydrology, and other disciplines. Tlingit people have lived in Southeast Alaska for 10,000 years or more, and their traditional educational system is built on four primary pillars/corner posts based on the foundation of respect: (1) Lingít áwé wa.é. Kaa x’éide kukg̱ees.áax. (You are a human being. You are to listen.); (2) Lingít áwé wa.é. Yaa keedzigéi. (You are a human being. You are Intelligent.); (3) Lingít áwé wa.é. Yáa at yakg̱eenéi. (You are a human being. You will respect all things.); and (4) Lingít áwé wa.é. Wóoch.een yéi jigaxyeenéi. (You are a human being. You are to work together.)

In their statement,“Teachers should not be the gatekeepers for student voices, and once we suppose we are, we miss half the conversation,” Chris Friend and Sean Michael Morris echo the voices of Merculieff, Roderick, Q’um Q’um Xiiem, Kaayastaan Maria Olsen, and Kingeistí David Katzeek. Chernik’s description of ethical hospitality supports the amplification of Indigenous Voices, as it supports welcoming those who have not previously been welcomed and doing so unapologetically. In doing so, ethical hospitality aids in transforming the higher ed. classroom to a more inclusive learning environment. Diversity of thought and experience does not hinder a learning community; the learning community actually benefits from the variety of experiences of its members, making it a more supportive learning environment to women and minorities. There are approximately 60,500 residents among 150 small communities in Alaska’s remote, rural villages, many with no roads or highways connecting the villages to Alaska’s more populated areas. The rural villages are often accessible only by water or air. Many students from these communities thirst for education from the the state universities but often do not find the environment one where they can claim a comfortable space. We must waste no time in adding this to our list of what constitutes hybrid learning, for every day we do not practice this, we lose valuable, vital, and engaging knowledge.

The top of my syllabus reads,

“When groups of people who share a social and cultural context work together to learn, a culture or community of learning develops with everyone’s participation supporting a collective effort to learn something new. The shared objective, combined with the diversity of expertise offered by each member of the group and sharing what is learned while learning how to learn, all play a significant role in a learning community.” 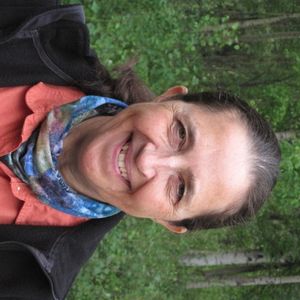 Sue Renes
Sue Renes is an Associate Professor in the Counseling Department of the University of Alaska Fairbanks. Her focus is on recruiting and retaining rural and Indigenous students into higher education.
RSS
Read more articles by Sue Renes.
Addressing the Elephant: The Importance of Infrastructure
I am an innovator. And yet, I still struggle with what exactly that means. Say you’re driving down a west coast highway in your economy car, listening to music, admiring the landscape around you. You look up and see that there are old electrical (or maybe they’re telephone)

Risk, Reward, and Digital Writing
Autocorrect is tyranny. It is interruption of thought, of speech, of creation, a condition for — and sometimes a prohibition against — my voice being heard. When I type “phone-less” and autocorrect changes it to “phenols”, when my sister-in-law’s name, Asya, is regularly corrected to “As yet”, even the