The fact remains that to write is to trace, and to trace is within the reach of any hand
— Fernand Deligny, The Arachnean and Other Texts

Digital writing: Is it really different from all the other traces made with hands, that we leave in the material world? At one level it feels as though there’s been a decisive break. The writing that you’re looking at right now consists in the continuous act of digital becoming, reassembling itself as it makes and remakes the network that it travels around. It’s stored, it’s over there, it’s immediately here. There’s no shape to it that conveys directly the grip of a pencil, the strength of a wrist. It could have been spoken. And this isn’t trivial: this digital writing comes to you apparently weightless, placeless and cleaned of time.

We’re so used to this, sometimes we can only see it by looking at what is different. So what do we remember now about the feel of a piece of paper that was held in the hand of the person who wrote it, whose fingers pressed the crease, whose tongue sealed the envelope, delicately and skilfully avoiding a paper cut? What can we explain about how long it took for that envelope to reach us, still sealed up and considerably protected in law against falling into the wrong hands.

When was the last time that you held in your hands a piece of writing that was dear to you because of the hand that touched the paper before you?

I’m walking in company, following a trail up into a small gorge of redwoods. I’m using my hands to balance and feel and push myself along. As I’m walking and looking down, keeping my footing among the uneven rocks, I notice that someone has recently placed — with deliberation — handfuls of marigolds in odd places along the path. They don’t call to us, or demand to be looked at. I sense we’re in the presence of a private ritual, no more than a day old.

In 1967 conceptual artist Richard Long created A Line Made By Walking, by walking. He walked along a straight line in a field repeatedly until he had made a path, then photographed the path. He was 22 years old. For the rest of his career he continued to make versions of this straight line, in other places. Sometimes he made small arrangements of stones. His lines made by walking are deliberate and austere, imposed like the boundaries in Africa and Australia drawn by the colonial straight edge. As he describes it, each walk extends the conversation with time and place that he began with the first line made by walking.

The thing is, though, that real human walking is continuously troubled by the ground we walk on. On the ground we detour, swerve and scramble. We take wrong steps, and back up, and try again. And over time we make paths by following each other’s line of thought: that way is the shorter line between points, that way avoids the tree, and so on. Gradually these paths become visible to everyone, and then they tell us something important about the gait, the weight, and the lean of our bodies. We call these desire paths, and many other names — vernacular paths, goat trails, elephant paths — but it seems to me that they’re a kind of collaborative writing of our common selves onto the surface of the earth.

I was just here. We all were.

Noticing the dried marigolds tucked into cracks in the rocks, I found myself thinking about how we write ourselves into places that we understand as somehow shared, even if we experience them alone. Digital writing doesn’t seem to me to be fundamentally different to this. Sure, there’s writing online that’s theatrical, highly polished, and demanding to be noticed. It’s virtuoso digital writing, taking advantage of all the dazzling things the network can make possible, linking and embedding and calling up. It expects a crowd.

But there’s another kind of digital writing that’s the trace of a small private ritual, a pile of stones left in public for someone who might come along. We write alone online in tiny or substantial ways, just as we write our names on walls and trees and stones and desks and in wet concrete. We write to put ideas to the test, and to make sense of things that are hard to fix on. We write to say that we were just here, thinking this thing.

This isn’t the deliberation of writing letters, or even the deliberation of making conceptual art by walking, but it’s deliberate in its own way. And it isn’t quite the privacy of the paper notebook, the bedside journal. We don’t know who will care about what we have written, but we form the sentences and craft the shape. So who are we writing for? Who do we hope will see these traces of our thoughts?

Arthur Frank writes, following a path trod by Levinas, that what is written has a capacity to lay some kind of moral claim on those who come upon it later. I feel this practice of writing as moral claim has to do with the here-I-am of all the traces we leave in the world.

The moral moment is when the text calls on the reader — on me — just as the patient calls on those who offer care. The here-I-am of the writing is a generous offering of self as witness. The generosity calls for a response of here-I-am from the reader. … The dialogue of author and reader is the beginning of other dialogues; in the multiple sites where medicine is offered and received, where care is given, and where healing occurs.

This then is the real weight of digital writing: the persistent and polyphonic dialogue with digital reading. We hardly notice this, fast movers that we are, but in networks we have created astonishing practices of simultaneity, a new form of writing that exists at all because of its willingness to be continually surprised by what it comes across. We write in the first instance to put our here-I-am into some kind of shape. But it’s in the network that we fill our writing with grace, when we become one another’s strangers, coming upon marigolds and small piles of stones, and taking time to think with care about the hands that placed them there. 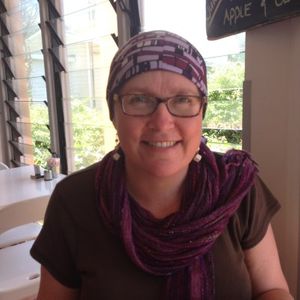 Kate Bowles
Kate Bowles is Associate Dean International in the Faculty of Law Humanities & Arts, University of Wollongong, Australia, and co-lead of NiCHE: Narrative informed Codesign in Health and Education.
Twitter RSS
http://musicfordeckchairs.com
Read more articles by Kate Bowles.
Dance : Work : Learn : Teach : Write
Prelude In a former life I was a dancer. A former life, or a previous era: BGS (Before Grad School). This is how I used to think of the countless hours I spent studying ballet in New York and Seattle, and performing with a university-affiliated company as an undergraduate in

Between Words and Pictures Emerges the Shape of Ideas
I want to share a quick few reflections on the particular way in which I see comics as a powerful way to express and organize our thinking. Defining this collection of practices we refer to as comics (or if you’re at the bookstore “graphic novels”) is a bit nebulous